Four standard threads of metric, inch, modulus and diameter control can be turned on a CNC lathe. No matter which type of thread is turned, a strict movement relationship between the lathe spindle and the tool must be maintained: that is, the spindle rotates once per revolution (that is, the workpiece One turn), the tool should move evenly by a lead distance (of the workpiece). Through the analysis of ordinary threads, we will strengthen our understanding of ordinary threads in order to better process ordinary threads.

The minor diameter of the thread is: large diameter-2 times the tooth height; tooth height = 0.54P (P is the pitch)

The feed amount of thread processing should be continuously reduced, and the specific feed amount should be selected according to the tool and the working material.

3. Programming and processing of ordinary threads

1. With the G32 straight cutting method, since both sides of the cutting edge work at the same time, the cutting force is large and the cutting is difficult, so the two cutting edges are easy to wear during cutting. When cutting a thread with a larger pitch, due to the larger depth of cut, the blade wears faster, resulting in an error in the pitch diameter of the thread; but the processed tooth profile has a higher precision, so it is generally used for small pitch thread processing. Since the cutting of the cutting tool is completed by programming, the processing procedure is relatively long; because the cutting edge is easy to wear, frequent measurement must be made during processing.

2. The G92 linear cutting method simplifies the programming and improves the efficiency compared with the G32 command. Need to learn UG programming, in the QQ group 45867470 can give you help and study guidance.

3. G76 oblique cutting method, because it is single-sided cutting, the cutting edge is easy to damage and wear, so that the processed thread surface is not straight, the tool tip angle changes, and the tooth profile accuracy is poor. However, due to its single-sided edge work, the tool load is small, chip removal is easy, and the cutting depth is decreasing. Therefore, this processing method is generally suitable for large pitch thread processing. Because this processing method is easy to remove chips and the cutting edge processing conditions are better, this processing method is more convenient when the thread precision requirements are not high. When processing higher-precision threads, it can be finished by two-tool machining, firstly using the G76 machining method for rough turning, and then using the G32 machining method for finishing. But pay attention to the accuracy of the starting point of the tool, otherwise it is easy to buckle randomly and cause the parts to be scrapped.

How to fold the saw blade of a band saw when not in use? 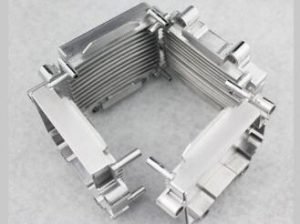 What are the annual maintenance contents of CNC lathes? How to carry out maintenance